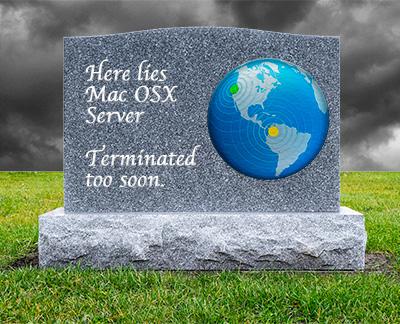 In January this year we started upgrading Mac servers to Mojave, and it’s been a challenge for those of us that do Apple Mac tech support for a living.

Apple have been quietly changing their focus away from macOS Server over the last few years. The latest version is missing some vital tools, resulting in server permissions which are hard to setup and maintain.

Okay okay we get it… it’s time to move away from on-premise Mac servers altogether. But what’s the replacement?

Stay on-premise or move to the cloud?

For small businesses, on-premise servers make sense if you’re in an industry which requires you to store information in Australia. The legal and medical industries immediately spring to mind. Additionally, businesses which have very large data files (video editing, for example) may be good candidates for on-premise servers.

There used to be clear niche-use cases where an on-premise Windows Server or a Synology NAS made sense. Features like Active Directory, virtualisation, or remote desktop services. Stuff you may not even know you use – and all of which are now available via cloud services.

But apart from all that… The biggest reasons to move away from on-premise servers are that they suffer from three intractable, fundamental problems:

All that money and nothing transformative to show for it.

It’s time to move to the cloud with Dropbox

Most businesses aren’t constricted to on-premise servers, so a cloud option is far more effective. There are no up-front hardware costs, VPN is a thing of the past, and you don’t have to worry about future growth.

Unlike regular file servers, Dropbox for Business integrates tightly with Macs, Windows PCs, and mobile platforms like iOS and Android.

Most of all, moving to a cloud service like Dropbox means you can work and collaborate with colleagues and contractors in ways which simply aren’t possible with on-premise servers. This can have an immensely significant positive impact on the way you work.

Let’s look at a couple of scenarios where Dropbox can transform your business.

At Maggie’s school, all homework assignments are handed in online.

Each class has it’s own folder, and each folder has a subfolder for each assignment. Students are given a link for each assignment, which lets them drop their work in. No student can see anyone else’s assignment once inside, and no submissions are allowed after the deadline.

Teachers can then collect and grade all assignments online, saving time and paper.

Susan’s 11 staff are mostly in one office, except for Alan and Louise, reps who are on the road.

The office workers and reps all need access to the company files needed to do their job. With Dropbox for business, the reps have the documents they need on their laptops and iPads, all the time without any complex VPN. Moreover, they don’t need to bother their colleagues to “send the latest version”.

And if a device is lost, company data can be quickly removed.

Tom runs a building company, typically working on 3-5 projects at a time. Each project has it’s architect, plans, and contractors.

Dropbox lets Tom silo each project into it’s own team folder, inviting workers as he needs them. There’s no emailing documents around, no time lost just to keep people in the loop, and no mistakes due to old plans.

As each party’s work is done, Tom removes them from the team, which deletes the project documents from their devices.